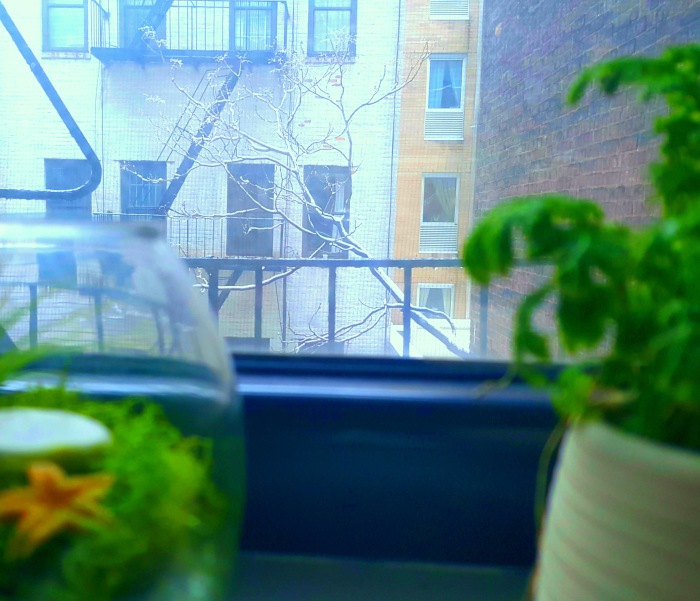 My plan of moving to New York City began when I started this blog 5 years ago. As I kept an eye on the real estate of the apartments over time, I knew I would live in a small studio apartment for three main reasons: affordability, connectivity and creativity.

But, a lot of thoughts needed to be put into defining and re-defining my essential belongings, both in terms of utility and aesthetics, when I decided to move into a 175 sq. ft. nano-studio in East Village from my 625 sq. ft. one-bedroom apartment in Dallas.

Rule 1: Prioritize essentials based on how much time I spend with each one of them

This is very simple as immediately the bed, the study table and the chair came up on top of the list. Saying goodbye to my 8 year-old, king-size bed back in Dallas and adjusting to a smaller sized study table in the new apartment was not easy. But, the new, small bed by the big window during the winter (and a huge in store discount from the Mattress Firm) calmed me down. The study table was initially a side table that my neighbor was throwing away. I just replaced their short legs by regular ones with a trip to the Ikea in Brooklyn. Instead, of my old, bigger chairs, I switched to a folded chair from Ikea for study purpose. 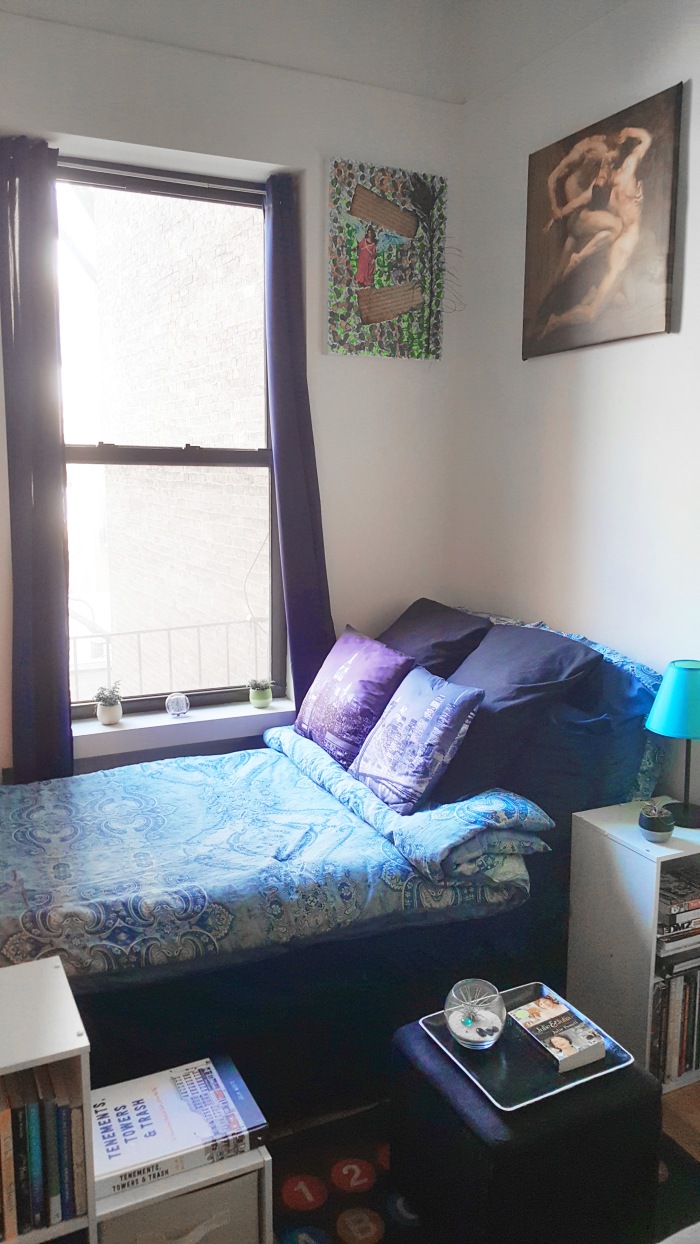 Rule 2: Every essential must have multiple purposes

The bed, with simple and alternative arrangement of pillows on top, becomes a day bed, if needed to be used for sitting during the day. The study table placed strategically becomes the kitchen counter top when I’m cooking and serves the purpose of a dining table when I pull out the dining stools from underneath it. The study chair wears a furry blanket from Family Dollar and with my New Yorker pillow on top, it adds more sitting places when I’m entertaining friends.

Rule 3: Books and paintings can be used to further define the space

As my books and paintings are part of my essentials, I used them to further augment the interior design. To bring the eyes up, I hanged the big paintings just 3 ft. below my 14 ft. tall ceiling matching the window height and thus using the tall ceiling as a breathing space in such a tiny studio. One set of books went in one of the cubes of a step-wise 9-cube organizer that also served as my tiny bar with DIY lights in an odd corner (thanks to extension cords from Jack’s 99). The other set was stacked vertically by the side of the bed with the night-lamp on top. 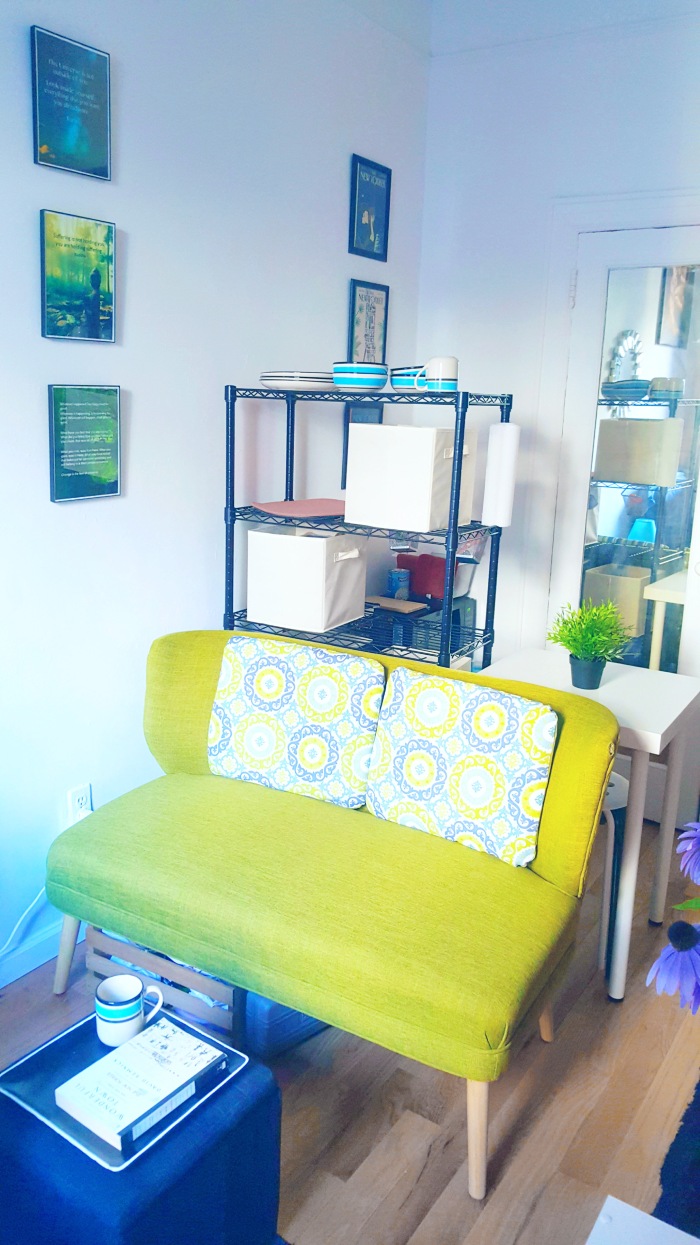 Rule 4: Owning big furniture is not bad if we manage to place them strategically

My green, mid-century modern couch from Walmart has a nice story. Having no elevator in this old building, I went back and forth between – to buy or not to buy, used vs. new, and pricey Wayfair or CB2 vs. affordable Ikea, Target or Walmart. The Walmart one became the winner because of its size, price, color and unique shape. Once dragged across a block, carried along 4 flights of stairs and assembled all by myself (surprised by my own upper body strength), I placed it facing the window. In this way, it separated the kitchen area at the back from rest of the place. Nobody wants to sit in a couch to look at the wall even if they are full of art and I was not going to buy a TV that I would never watch. Looking at a beautiful backyard, the trees and the sky through the window is way better. The plus is that the ottoman (hiding extra pillows inside) with the wooden tray placed on top serves as a side/center table in the living space and the night lamp doubles as the reading lamp in the evening.

No, I don’t want the first thing people see is my bed when they enter my studio. Although I have a surprisingly long hallway with coats, hats and boots and the door to my private bathroom, being able to see the bed right after entering the studio is an awkward breach of privacy. So, I put the 9-cube organizer holding my tiny bar, DIY lights, a set of books and my art supplies hidden inside the cubes by the foot of the bed. It partially hid the bed and separated the sleeping space from living space by creating a visual barrier. The bright paintings and mixed media pieces hanged high did the rest of the trick to divert attention from the bed. A similar technique was used for the kitchen storage. As this apartment had no kitchen, I separated the refrigerator and the microwave using a storage shelf from Amazon placing it along the width of the studio right behind the couch. The open shelf serves as my pantry without blocking any natural light flowing in the kitchen.

In an open studio layout, a lot of designers define each space – cooking, living, study and sleeping, by different colors and textures of the furniture, paintings on the wall and rugs on the floor. That trick works in a slightly larger studio. But, for my 175 sq. ft. I had to find an alternative without making the place overwhelmingly crowded and looking like a mini-storage room. So, I used color and light to create a flow from one area to another. The blue and white of the sleeping area are accompanied by tiny green ferns in the windowsill (welcome to New York gift by cousin Ari) and a mixed media piece with bright green leafy patterns. This flows into the green couch and the greenish meditation posters in the living area. The pillows on the couch connect both color schemes with patterns of green and blue. Again, this flows into the kitchen area with green plants and the cyan colored tiny refrigerator before the red dining mats and the kitchen towels take over with a bright, energetic schema. The slight flow of color through each area gives the sense of openness by balancing the physical barriers created by the strategically placed furniture.

I employed some of the well-known techniques, such as, use of the big mirrors to reflect natural light. But, they are so overly discussed everywhere else, I don’t have to. On the other hand, I avoided certain popular techniques, such as, white washing everything in the apartment to give the false impression of big and open. I wanted to embrace the smallness of the apartment instead of getting away from it. And honestly, everything white is not my style as it reminds me of the rooms of some mental asylums.

If there is a single element that binds every decoration decision of mine, it is New York City. Let it be the pillow cover with neighborhood-specific typography, the ikea-hacked tiny dining/study table, or the posters of New Yorker magazine and my favorite TV shows set in New York City. Many of these were created by my “Frank Sinatra” moments when I was away from the city terribly missing it. I’m that “third” New Yorker in E.B. White’s essay, who is a settler bringing in passion to the city of my last destination. And that’s the underlying element of each and everything I have in my nano-studio apartment.

Living in a city that has so much to offer, I still need a place for solitary reflection – my sanctum sanctorum! I’m glad my nano-studio apartment serves that purpose to my satisfaction.