Life is funny. And shamelessly cruel. 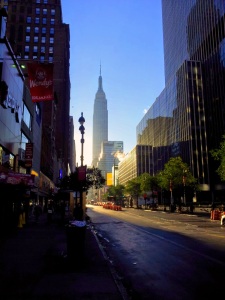 In the year of 2017, I couldn’t make my trip to NYC and was feeling such a strong attraction to the city that I haven’t felt before. I realized how Frank Sinatra might have felt when he was away from the city and he wrote his songs on how much he missed New York.

Finally, in the beginning of 2018, I could make my 13th trip to my favorite city. As it was the next day of the bomb cyclone, several of my well-wishers told me to postpone my trip. My friends did not. They know me too well. They know my obsession with NYC.

As the flight was leaving Dallas, I wrote –

“Let it be the bomb cyclone, let it be the cold
New York always welcomes me with a heart of gold!”

Who knew within a day of reaching NYC, something so unexpected, something so emotionally turbulent would happen to me, that I would try to prepone my return ticket to get back home!

So how did it happen?

It was 18F and it was snowing. I was feeling irritated as I couldn’t go see my Angel of Bethesda in the Central Park. I was just standing in front of the Plaza hotel and trying to find a place, any place to warm up a little bit. Then I saw a blue colored poster of a film where it looked like a man is resting his head on another man’s shoulder. Rolling Stone gave it a four star. I crossed the 58th St and walked to the Paris theatre where the film was playing.

I am very skeptical about LGBTQ+ films as most of them are crappy, titillating and they sabotage the art of film-making in so many ways I couldn’t even count. In stead of breaking rules, they get stuck in a stereotype. This film, as I read in the review, is based in sun-drenched Italy. It sounded like a pretty good film to watch while warming up a bit inside the theatre.

Little did I know, this film, named “Call me by your name” by Luca Guadagnino, would find a tiny opening to my skeptical mind and would plunge a white hot iron bar through my heart!

I didn’t really cry. At least not the first time I saw it. I knew I saw something beautiful, poetic, moving, real, brave, acute, tender and humane.

I moved on with my usual NYC chores: eating Indian food at the Curry Hill, watching the sunset behind the Southern Tip of Manhattan from DUMBO, meeting my friends and family all around the city, visiting the European sculpture court at MET, so and so forth. But, throughout the day, I felt like going back to the Paris theatre and watch the film again. As if something I have missed, as if something more I was wanting to get out of it.

The second time I saw the film, I bawled so bad. Thankfully the theatre during the day was very empty. I came out of the theatre and started walking across the 5th Ave. I couldn’t see the streets clearly as my eyes wouldn’t stop watering. And my tear drops would not turn into ice even though it was 20F. Suddenly, I could remember all the pain from all my past romantic relationships. Pain that I’ve frozen away in the form of stalactites in such obscure and faraway caves over the years, that even I couldn’t remember they existed. All of a sudden, they all were melting and flooding through my heart, shaking me and questioning the very fabric of reality I built within and around my life. It was not soothing water that put out the fire. It was a scorching lava that reinvigorated the flame.

The subject matter and the storyline of “Call me by your name” is not new to me. “La Nuit Bengali” by Mircea Eliade and “Na hanyate” by Maitreyee Devi told similar stories of love. A talented creative young girl or boy falls for the visiting scholar living in her/his house working with the girl/boy’s father, a highly notable professor of art, humanities or literature. They share a “fling” for a short amount of time. But, due to circumstances beyond their control (as they think) they part ways.

But, there are 3 unique things in this film that moved me.

First, the cinematography, the acting, the sound – made it so natural that I felt I was a character, an observer, inside the film. I could smell the basil in their food. I could taste the apricot juice they were drinking. I could feel the fabric of their clothes as they were cycling by the meadow or swimming in the trough. There were moments where I wanted to reach out and interact with the characters, specifically to guide Elio as he was so young and tender, wearing his heart on his sleeve, very much like me. I read later – this is the specialty of Luca Guadagnino’s films.

Second, there is no antagonist character that we see here. Neither internal, nor external. Everyone is very supportive of the love the main characters share with each other. I think this point made the separation even more painful. Who should we blame? Elio for falling in love? Prof P and Mrs P for not stopping him? Oliver for not telling that he might get engaged and married to someone else? I tried so hard to be angry and blame someone? So that I could turn my own pain into anger and revenge! The way I did in my scientific research by killing cancer cells with novel therapeutic strategies and making discoveries that people appreciated! But, in this cae, I just couldn’t!

Third, there is a very strong sense of vulnerability that the characters portray – the kind of vulnerability that can only be felt by people young-at-heart. It is brutal, naked yet brave and elating. There is no hero going through the monomythic “hero’s journey” described by Joseph Campbell and loved and celebrated by Hollywood! There is no one wearing prosthetics loved by Academy Awards juries. Hell, there is no one even twitting #MeToo in this film!

I was in such an emotionally turbulent state of mind, I wrote to my filmmaker friend in Dallas. She very kindly kept the conversation going until I could turn my pain into something creative.

I thought about a series of abstract paintings. But, I knew immediately it won’t be able to capture the plethora of emotions I felt. Next, I thought, I would write the story from Oliver’s perspective that the film or the book do not portray. Again, I felt like that won’t be satisfactory and fair to the fire I felt in my heart. Then, suddenly, as the 6 train reached the 14 St station, and I tried to keep my balance in the crowded subway, it came to me. I need to make something that combines words and images. I need to make a graphic novel.

This creative need was so strong, I immediately wanted to get back to my writing and drawing studio in Dallas. I listened to the 7 hour long audio book of the same name written by Andre Aciman, on which the movie was based. During the flight, I read the script by James Ivory and started brainstorming ideas about expansion and picked up clues on the protagonist of my graphic novel. 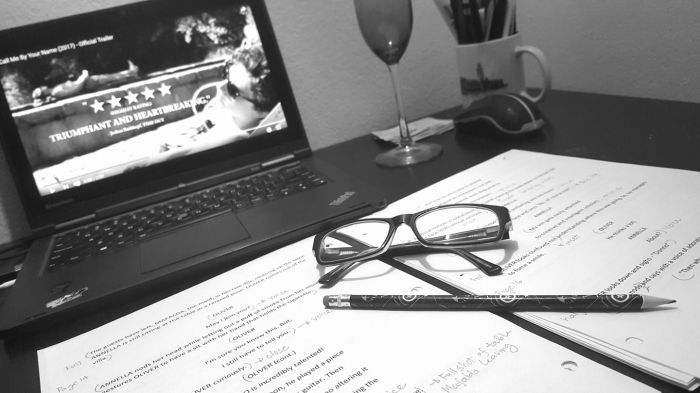 After I was back to my apartment in Dallas, I started writing the script. It took me 15 hours to write 22 scenes of the story that I wanted to tell.

The irony in this experience was that NYC, the source of my strongest obsession, tricked me into experiencing something that broke that very obsession and replaced it with just love.

I don’t know enough to understand why the film didn’t receive the Golden Globe even after 3 nominations. I wished the film won the Academy Awards just because a genuine story of love combining both joy and pain is highly timely to keep us human even with the lack of empathetic leaders all around the world.

I started to realize that while going through the usual stress, anxiety and pain of life, I have been losing bits and pieces of my heart. As a result I was also losing the ability to empathize, to feel genuine happiness and was gravitating towards thrills. Watching “Call me by your name” brought back the pain, the vulnerability, the empathy and the happiness in memories that I’ve locked down in such far away places that even I couldn’t remember. Now I realize that pain completes the happiness and is essential to be and stay human just like beauty in my art and in my science is incomplete without the suffering.

In the end, I want to steal Sufjan Stevens’ words, the hauntingly beautiful songs he wrote for this film, as he said it in a way I never could-